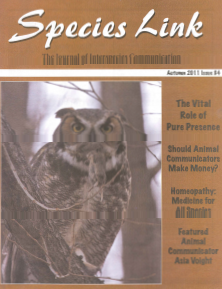 Animals are especially responsive to natural medicine. I’d like to talk about homeopathy, and which remedies you can use to help your furry companion as well as yourself without any side effects.

The word homeopathy is based on the Greek meaning. “similar suffering.” One of the fundamental principles of homeopathy, is “like cures like.” It has been found that, through constant application, a substance causing a symptom in a well person will address the same symptom in a sick person when given in an extremely small amount and prepared in a precise way. To enhance the medicinal energy of the substance, a single homeopathic remedy is chosen to treat the whole animal or person, including their mental, emotional, and physical symptoms. This is in contrast with conventional or allopathic medicine, where the focus is only on the symptoms and the medicines prescribed tend to suppress the symptom rather than address it. Of course, there are certain situations where allopathic medicine is necessary, but homeopathy can often provide a safe and natural alternative for some conditions. For the purposes of this article, we will discuss how to use remedies in acute, everyday situations. For longstanding chronic illness, please consult a professional homeopath or homeopathic veterinarian.

Is Homeopathy Safe for my Animal?

Homeopathy is noninvasive and gentle. Remedies are made from substances from the plant, mineral, and animal kingdoms. The remedies are never tested on animals, they are tested for effectiveness on humans. Among the acute conditions that can be treated are diarrhea, fearfulness, anxiety, aggression, and some skin conditions.

Homeopathy can be used in an emergency on the way to the vet. You can use it for yourself if you are anxious about the situation with your animal. Our animal companions pick up our feelings and emotions and it is always beneficial to remain calm, so you can provide the best care and support.

Following are a few actual cases which demonstrate the effectiveness of this wonderful medicine and how I often use my animal communication skills to determine the correct remedy.

Mingus’ only symptom was bleeding from the rectum. His people would find drops of blood around the litter box, but his demeanor was normal. The veterinarian advised an expensive surgery as the cat’s only hope, and even then, the chances of a full recovery we not encouraging. The vet said that unless Mingus had the surgery, he would have only a few weeks to live.

His people did not want to put Mingus through surgery and decided to give homeopathy a try. When I asked Mingus if it was his time to leave this dimension, he explained that he was not quite ready and that he had some work yet to do.

It is important to note that this cancer was in its advanced stages so at this point we could only hope to palliate his symptoms and give Mingus some quality of life until it was time for him to depart. In this instance it was Arsenicum album as it is one of the most widely used remedies in advanced stages of many diseases. It is termed an end-of-life remedy meaning that if the individual is meant to leave, it will ease the transition and if s/he is to stay, it will help bring him/her some vitality.

We began dosing Mingus with a low potency remedy to see how he would tolerate it. Within a few days, the bleeding stopped completely. We continue with this remedy, raising the potency as needed as the disease progressed.

Mingus lived a normal and happy life for the next nine months, and when his time came to depart, his transition was a beautiful one. His last work was to demonstrate to his people how to live fully and happily, no matter what life may bring, for it is not what happens to us in our lives, but how we respond that makes all the difference. When his people did finally bring Mingus to be put down, his vet was quite impressed.

Homeopathy helped to give Mingus the extra time and quality of life that he needed to complete his mission on Earth. His people remain most grateful for the most valuable lessons and remember their boy with love.

Roger’s person called me for some animal communication because his dog was the most destructive dog he had ever seen. He said he if he did not adopt him, he would have surely been put down because no one else would tolerate the damage that Roger caused in his home, his yard, and his car.

For example, the underground irrigation system in his yard was guaranteed for life and deemed indestructible. He came home one evening to find Roger in the yard sitting amid the water spraying up from the ground. Roger had dug and chewed the irrigation system to the point of no return.

When I asked Roger why he was so destructive, we discovered an underlying deep fear of being left alone, weather in the yard, the car, or the house. Roger also did not want to be touched because he suffered from past abuse. His fear was overwhelming.

I immediately knew that Stramonium would be the remedy to help this dog. Stramonium is one of the remedies used for this kind of deep-seated fear, and covers the destructive aspect that Roger was demonstrating. We gave him a dose of the powerful 200C potency. A few days later, I received a call from his person saying that Roger was not the same dog. Very shortly after taking the remedy, Roger began playing with the other dogs and was not destroying anything as he had before, and now he allows his person to pet and cuddle him. Roger continues to enjoy a full and wonderful life with an occasional dose of his remedy to keep his unwanted behavior in check.

I sometimes find that an animal needs more than a conversation when deep emotions, such as fear are held in the cells of the body. A deep acting homoeopathic remedy can assist the vital force with such an imbalance. It’s not always the case, but for Roger, homeopathy was the answer.

I received a call from Arnie’s groom asking for some help with the horse. While Arnie was fast as the speed of light, he would not enter the starting gate without rearing up wildly, his eyes glazed in fear. The groom said Arnie just could not keep his feet on the ground when they were near the gate.

I asked Arnie what his problem was at the gate, and he told me that his previous owner would beat him into the gate, and he did not want to go in there anymore. This case had a bit of a twist because the owner of the horse did not want to give him any medicine, homoeopathic or otherwise, for fear it would he be discovered by the racing authorities. While homeopathic medicines cannot be detected in the physical system, the owner remained firm in his decision.

So, I further explained to the groom that we could imprint some plain water with the energy of the remedy by placing the name of the remedy under glass filled with clean water. The energy is transmitted from the word written on the paper.

The remedy selected again was Stramonium. The groom was to give him a dose of the water infused with the remedy the night before and the morning of the race. I also explained that when walking to the gate, she should visualize his four feet on the ground while assuring him that he would be safe. The night of the race, I received a call from the groom thanking me. He told me that not only did Arnie enter the gate without a problem, but he took first place.

My practice is dedicated to helping people and their pets attain balance in their lives, so they may realize their highest potential. These recommendations are never meant to replace good veterinary care.