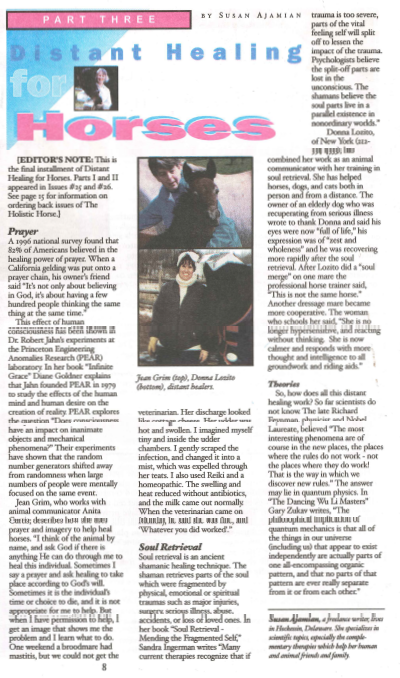 A 1996 national survey found that 82% of Americans believed in the healing power of prayer. When a California gelding was put onto a prayer chain, his owners’ friend said, “It’s not about believing in God, its about a few hundred people thinking the same thing at the same time.”

This effect of human consciousness has been shown in Dr. Robert Jahn’s experiments at the Princeton Engineering Anomalies Research (PEAR) laboratory. In her book “Infinite Grace” Diane Goldner explains that Jahn founded PEAR in 1979 to study the effects of the human mind and human desire on the creation of reality. PEAR explores the question “Does consciousness have an impact on inanimate objects and mechanical phenomena?” their experiments have shown that the random number generators shifted away from randomness when large numbers of people were mentally focused on the same event.

Jean Grim, who works with Anita Curtis describes how she uses prayer and imagery to help heal horses. “I think of the animal by name and ask God if there is anything He can do through me to heal this individual. Sometimes I say a prayer and ask healing to take place according to God’s will. Sometimes it is the individual’s time or choice to die, and it is not appropriate for me to help. But when I have permission to help, I get an image that shows me the problem and I learn what to do. One weekend a broodmare had mastitis, but we could not get the veterinarian. Her discharge looked like cottage cheese. Her udder was hot and swollen. I imagined myself tiny and inside the udder chambers, I gently scraped the infection, and changed it into a mist, which was expelled through her teats. I also used Reiki and a homeopathic. The swelling heat reduced without antibiotics, and the milk came out normally. When the veterinarian came on Monday, he said she was fine, and ‘Whatever you did worked’.”

Soul retrieval is an ancient shamanic healing technique. The shaman retrieves parts of the soul which were fragmented by physical, emotional, or spiritual traumas such as major injuries, surgery, serious illness, abuse, accidents, or loss of loved ones. In her book “Soul Retrieval – Mending the Fragmented Self,” Sandra Ingerman writes “Many current therapies recognized that if trauma is too severe, parts of the vital feeling self will split off to lessen the impact of trauma. Psychologists believe the split off parts are lost in the unconscious. The shamans believe the soul parts live in a parallel existence in non-ordinary worlds.

Donna Lozito, of New York has combined her work as an animal communicator with her training in soul retrieval. She has helped horses, dogs, and cats both in person and from a distance. The owner of an elderly dog who was recuperating from serious illness wrote to thank Donna and said his eyes ere now “full of life,” his expression was of “zest and wholeness”, and he was recovering more rapidly after the soul retrieval. After Lozito did the “soul merge” on one mare the professional horse trainer said, “This is not the same horse.”

Another dressage mare became more cooperative. The woman who schools her said, “She is no longer hypersensitive, and reacting without thinking. She is now calmer and responds with more thought and intelligence to all groundwork and riding aids.”

So how does it all work? So far scientists do not know. The late Richard Feynman, physicist, and Nobel Laureate believed “The most interesting phenomena are of course in the new places, the places where the rules do not work – not the places where they do work. That is the way we discover new rules.” The answer may lie in quantum physics, in “The Dancing Wu Li Masters” Gary Zukav writes, “The philosophical implication of quantum mechanics is that of all the things in our universe (including us) that appear to exist independently are actually parts of one all-encompassing organic pattern, and that no parts of that pattern are ever really separate from it or from each other.”