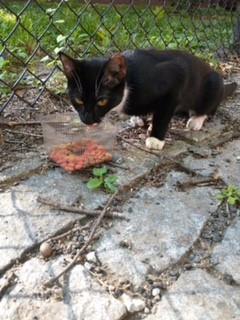 As unbelievable as it may seem amidst the hustle and bustle of New York City, stray animals roam.  A situation arose in upper Manhattan regarding the relocation a feral colony of cats. A woman named Karen who I had worked with before called and asked, “Is it possible to let the cats know that they must relocate and tell where we want them to go?” She was feeding them daily over the past several years. She explained that their lives depended on this as the weather was getting colder. The new location offered food and shelter for the entire colony. They were no longer permitted where they were living.

Conversing with wild animals (or those who do not interact with humans) is the same telepathic exchange of energy using thoughts and images as it is with domesticated animals. They understand what is being communicated if the communication is clear and concise. The goal was to move the entire colony, so we got to work.

For the most part, the group avoided human contact. They were born on the streets of New York City. However, there were two cats who had been spotted once or twice before. Chocolate, a big black savvy male who was seemingly in charge but rarely seen, and Socks, a smaller black male who barely allowed himself to be touched.

I knew I would need some back up support, so I contacted my Band of Spirits. The Band is a group of animal master spirits who are available for this type of work, led by my beloved Sweet Dreams Lozito. They can be additional influences that help in situations needing a nudge from the spiritual realms. Animals are very familiar with the other dimensions of our Universe. They are less threatened by these energies than us. In the past, they have successfully aided me with cases of lost animals or situations where the communication was essential to life. I advised my boy Sweet Dreams what was needed, and of course he agreed to assist with his fellow spirits, Brio, Charlie, Rosie, Roscoe and Dakota.

I explained to the entire colony that their food supply at the present location would be changing and re-located to a new place in three days. Karen sent me a photo of both places, so I was able to send the visuals that corresponded with my words. I also asked her to go to the old area and do a broadcast aloud reiterating the same message. I then asked her to go to the new location and let them know that this was their new home offering food daily. When communicating with animals in this way, it is advisable to repeat the messages several times. In this case, the message was repeated for the following three days. I worked with the cats daily from my home and Karen worked with them each day on location. Sweet Dreams and the Band worked with them when we were sleeping.

After the fourth day, it was reported that Socks was spotted nibbling at the new location. I had a chat with Socks and told him to please inform the others and show them exactly where to go. I again asked Sweet Dreams to stay with the colony and nudge them towards the new place. Several days later at the new location, only a small amount of the food was eaten and only a fraction of what had been eaten at the old location. I again asked Socks to guide the entire group to the food and shelter. I also contacted Chocolate again and repeated the message. He indicated to me that he was aware of the situation and that things were under control.

We continued our connection with them for the next week. I received a call from Karen saying that after eight days, all the food had been eaten as it had in the past. The cats were using the new location regularly.

This is just one example that demonstrates how animals have the ability, awareness, and intelligence to understand how to navigate their world. They have a better understanding of the universe and how it works than most humans. They are connected to the rhythm of nature and can serve as an example for all of us to improve our communication with the earth. I consider it a privilege to learn from the animals every single day.