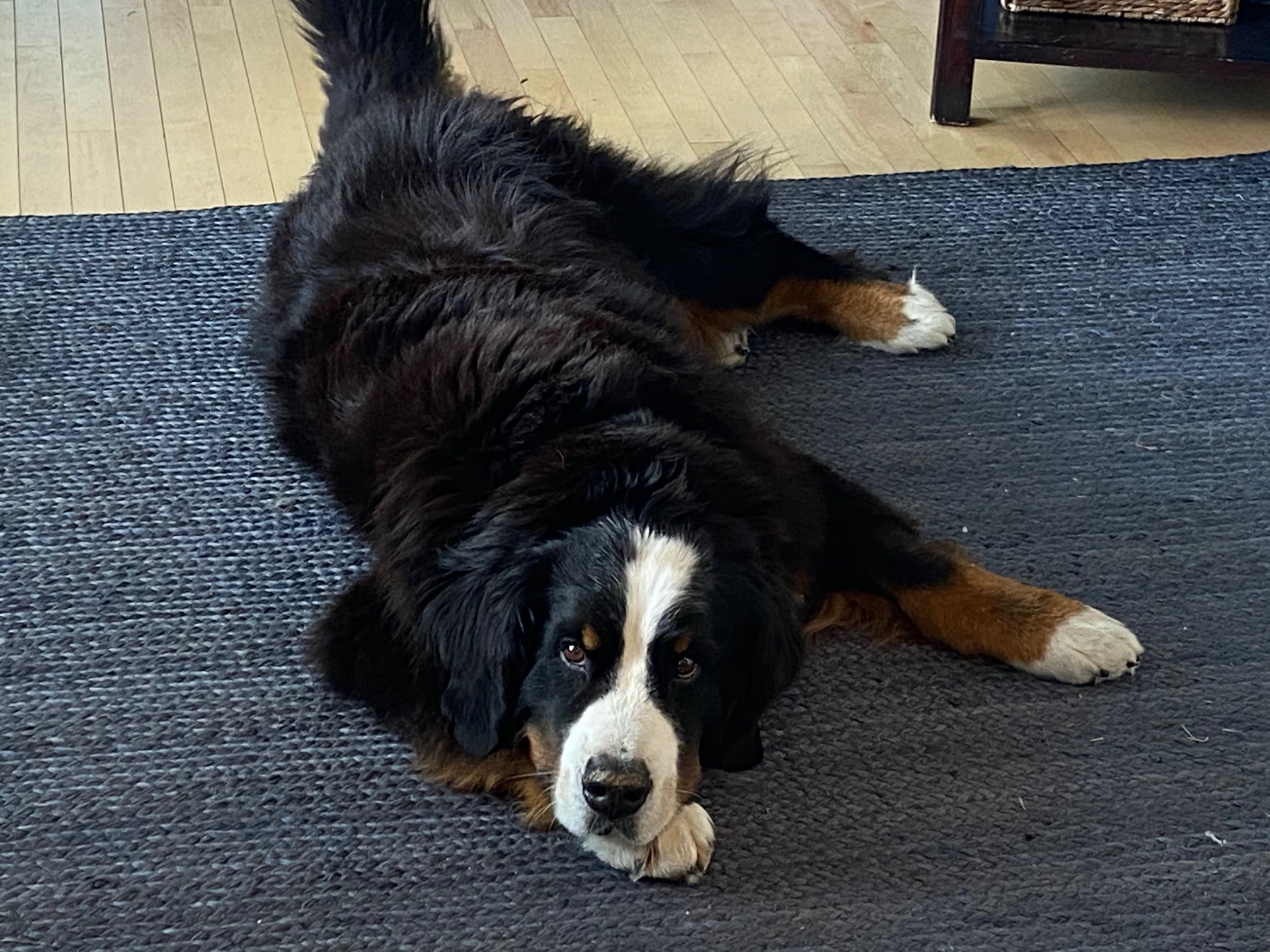 Over many years in practice, I have witnessed (with incredible privilege) the soul journey of many animals traveling with their humans. This is one such story about a dog named Roscoe, known as “The Big Guy,” describing what he considered his most sacred mission. A Bernese Mountain dog (a.k.a. Berners), born in the backyard of a breeder nearby his human and animal family in Wisconsin. He lived with Mom and Dad, as well as Dakota (big sister Berner) Henry and Runner the two cats. Dakota and Henry were buds… Roscoe and Runner were the very best of buds.

Dakota was the boss dog. Roscoe welcomed this dynamic. He loved her and was happy to let her run the show. He knew his work on earth did not include being in charge but to smile all the time. From his perspective smiling and leading the pack were two very different assignments and no dog could do both at the same time.

He was aware from the beginning that the size of his energy (which filled an entire room) was equal to the size of his mission. He knew he was a healer/ teacher and was pleased that he was able to do his work and still enjoy his dog body to the fullest. His work here on earth consisted of opening hearts and shining his light on every path he crossed.

He was outspoken when questioned but otherwise went with the flow of things. He knew his tolerant nature was for the greater good of his humans. One year he was reacting strangely to the Christmas tree being in the house. When his person asked him why the reaction to the tree? He replied, “I don’t understand why humans would bring such a big tree in the house when it belongs outside.”

He knew he could make his mom smile like no one else could. She was the one who cared for his every need. He could depend on her to help him feel better all the time. He loved spending time with his dad. The rides in the jeep were his favorite. He called it, “boys time” which he enjoyed to the fullest. He was especially thrilled when he got to ride in the front seat and gather every scent near and far.

As years past Roscoe developed physical issues that come with old age. He managed to enjoy each minute of life no matter what was ailing him. This was part of his mission. He was to show humans that life should be lived to the fullest at every moment even in spite of difficulty.

He had arthritis and hip dysplasia. He was diagnosed with Geriatric Onset Laryngeal Paralysis Polyneuropathy (GOLPP). Might I take a moment here to say that our animals come to us in physical form with their issues (both physical and emotional) with purpose. The loving care we provide them paves the way for deeper meaning and purpose in our lives. The experience we are given to travel with these beings on our soul journey is a gift of life. They reflect back to us that which we cannot see about ourselves. They lead the way shining a light on our path so we can make better choices and understand our truth. When they leave the physical form, the journey does not end. In many cases it marks the beginning of another chapter in life’s journey.

It came time for Dakota to leave this earth and lead from another dimension. Roscoe knew the plan better than his people. He missed her at first but realized that now he was top dog and enjoyed every minute of his newfound title.

Roscoe continued intensive care for is ailments. He was on many meds, homeopathy, Chinese herbs, and acupuncture. He had the one surgery offered dogs with GOLPP. After the surgery it was easier for him to breathe as his larynx had lost its ability to control the flow of air to his lungs.

A new puppy arrived on the scene. Roscoe named him River. While he was not that fond of River, he knew this little guy would replace him when his time came to leave the earth.

A short time after River’s arrival it was discovered that Roscoe’s liver counts were high. His mom took him to the ER to see if she could find the issue and help normalize his blood. He waited in the ER for hours. He was extremely anxious at the ER. He was an anxious dog to begin with so five hours in the ER was more than he could manage.

Upon sedation for his ultrasound Roscoe coded. This means his heart stopped and he was gone. The doctors were astounded as it is highly unusual for an animal to code under these conditions. They performed emergency procedure and a miraculous event occurred. Roscoe had died and come back in a matter of a few minutes under treatment. Animals who suffer these events rarely come back never mind return home. The veterinarians did send him home, but he was worn out and tired.

His mom asked when we spoke what exactly did he see when he went to the other side. Roscoe replied, “All I saw were the bottom of Dakota’s feet, so I had to turn around and come right back.”  Dakota took charge once again. Her choices were always in the best interest of the entire family as she was still watching over things from the other side. Both Roscoe and Dakota knew that if he died on that table then his mother and father would blame themselves forever. Animals know that when it comes time for us to die, we create situations for this to occur. Humans on the other hand can never fully grasp that concept. We seem to think we can control uncontrollable situations. In this case, his mother would have felt particularly responsible so he had to return for whatever amount of time he could.

A short time passed; Roscoe’s liver was causing issues. He knew now that it was his time. He could not handle any more of treatment that he had in the past. Within a few days he lost his appetite, and his family knew it was his time. He requested one last jeep ride which he thoroughly enjoyed, and he departed the earth on July 12, 2022.

Roscoe is greatly missed. He followed his soul’s mission to bring light and smiles to all. He left a trail of open hearts now ready for their next steps in life. He claims he may be out of his body, but he has not completed his mission. He is close to the house and to his people. He hangs with Dakota sometimes he says but she is not in charge as when he was in his body. He assures there will be more to come. Much healing is necessary before his next steps are revealed.

Our animals change our lives forever as it is intended. They light the way so we may experience greater spiritual growth. They demonstrate the power of the present moment and create new pathways for us to follow. If we are wise enough to continue to seek their guidance, we come to see that they are indeed spiritual masters who offering us a way to the light.

Below are a few words from Roscoe’s mom explaining her experience of their life together.

“You were, are, and always be the light of my life. I fell in love with you the moment I laid eyes on you. Little did I know you would change my life forever. You showed me love in its purest form. I had never experienced this kind of love before, and I am so very grateful for your gift.

Your personality filled a room. It was pure happiness! You were the happiest, goofiest, and sweetest dog I have ever met, and it was an absolute honor to be your mom. The joy you brought to my life is immeasurable and I will miss you every day for the rest of my life.

You were such a brave boy, and I am so proud of you! You overcame so many hurdles in life. Way too many for any dog. And you did it all with such grace. Even in your hardest moments, you still wagged that beautiful fluffy tail of yours.

You loved to run. I envision you running through never ending fields with the biggest smile on your face. You are pure light and love; sweet boy and you really did make my heart sing. Thank you for it all. Every day. I am forever grateful for the ride”.