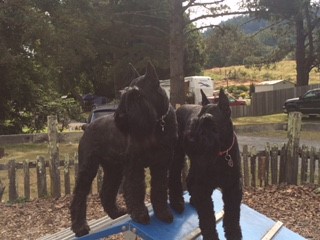 I would like to take a moment to honor the life of my dear friend, Samson. He was a giant Schnauzer who left his physical form on November 24, 2022. He lived in Arizona with his human family and his dear sister Delyla, also a giant Schnauzer who was not quite as large as he. They had a wonderful relationship and supported each other in the best way two siblings could.

Samson was larger than a mini horse and when he walked into the room his presence commanded the attention of all who were present. He had his own personal perspective and opinions about things. He wanted what he wanted and could not understand why he should get any pushback for any reason. When I met Samson, I could see that he needed us to understand his point of view. Once he felt understood he would agree to try and compromise. For example, he could not understand why he could not eat the trash when mom was not home. “After all,” he would say, “It is there so why can’t I eat it?” He had a bit of separation anxiety, so this behavior would soothe him while mom was out.  Once assured that he was safe and that mom would return, his behavior slowly improved. When behavior is driven by early fears, it can be challenging to correct. With constant work and understanding, Samson began to mellow as he aged.

Television was one of his favorite pastimes. He especially loved the animal shows, but in general he was entertained by anything that was on. He also traveled extensively with his family in their RV. He loved going to new places having all the world admire how unique and special he was.

Over the past year or so, Samson survived two toe amputations. He had been diagnosed with bone cancer but managed to continue with his active life. Recently, another toe had been affected. At the next vet visit it was determined that the disease had metastasized to his lung. It was suggested waiting on the surgery since the toe was not seemingly painful. He managed four more weeks but then it began to ache. An appointment for amputation was set to remove the toe. Testing pre-surgery determined that the disease spread significantly, and that the amputation would only buy him a short time.

The day of his surgery his mom kissed him on the head and was sure to acknowledge what a brave boy he had been. Samson went into cardiac arrest on that day. His mom felt it best to let him go. She did not order him to be revived just to say goodbye. She knew what was best for him, as she always did.

In spirit, Samson assured his mom that her decisions from the delay of the first surgery to the last moment of his life were the right ones. He said his body could no longer sustain any medical care. He let her know how grateful he was for the wonderful earth ride they took together.

It is a human condition for us to question the decisions we make for our animals at the end of their lives. Samson demonstrated for us that there is divine intervention and guidance in all that we do, even when we don’t realize it. A day or two later, we contacted Samson in spirit again. He made it clear to his mom that had she not decided to delay the first surgery, they would never have gotten the gift of those last four weeks. He said that he would have coded on the table, as the surgery was not meant to be.

Samson reminded me that everything that occurs on the earth is divinely orchestrated. There is a greater force that connects us to the source energy that organizes the Universe. If we remain conscious of this, as the animals do, our lives will express a sense of purpose, acceptance, and love in our daily existence.

Samson continues to shine his light in and around his home. He carries on daily conversations with is sister Delyla.