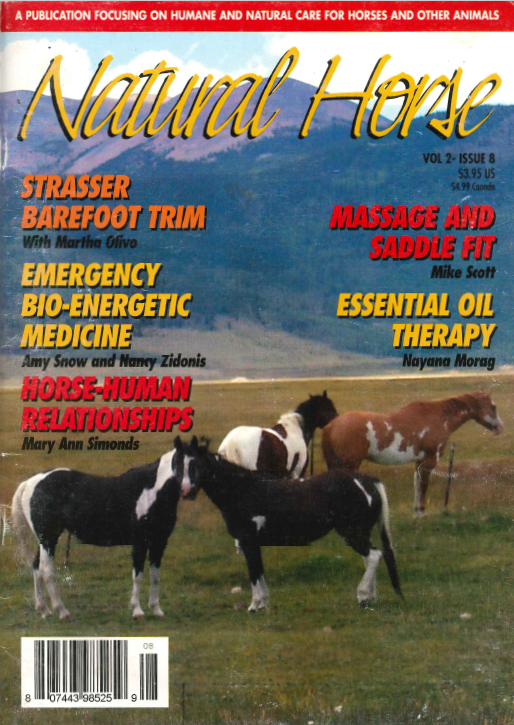 Annie is a very dignified and graceful Grand Prix dressage horse with quite a sense of humor. Animal Communicator, Donna Lozito of New York City, interviewed Annie wo lives with the Rawle family and 20 other horses along with dogs and cats at Watermark Farm in Oxford, Pennsylvania. Donna spends weekends visiting her horse Sweet Dreams who lives in the same county as Annie. So Donna suggested she visit Anne in person, instead of doing the consultation over the telephone like she usually does.

Eleanor (Ellie) is Annie’s rider, But Ellie was unable to join us for the interview. So, Anne, her mother asked Ellie’s questions and her own. They thought Annie would be interesting to interview because of the contrasts in her life. Horse show programs list her as a German Hanoverian, “Duell Anastasia”, and she is even in the German High Studbook, based on her very famous ancestors. There’s no hint that Annie was born and lived wild in Australia until she was bought out of the field at the age of seven by the family who kept her until the Rawles bought her three years ago.

From Brumby to Grand Prix Horse

Anne tells how Annie’s previous owner bought her to become and event horse. “They spent two years with Annie going ‘buckity, buckity, buck’ up and down the hills, “she said. Then her rider’s mother needed a new dressage horse and tried Annie, who proved to be a natural. Anne found dressage very easy to learn and quickly developed into a Grand Prix horse. Annie said, “I was born to be a dressage horse. I made that choice. I also wanted to be wild, so I started out there. But dressage was my goal. Being born wild gave me the best of both worlds. I’m graceful, like a ballet dancer. I just needed to learn the steps (to do dressage). Its’s the rider who needs training, not me. I’m a natural. Just point me in the direction you want, and I go.” Anne, a dressage judge fully agreed with Annie’s description of herself.

Even though Anne has had only three homes, she has helped teach many students how to ride a flying change. When Anne mentioned this, Annie requested that her students be focused, and preferably be women. She felt strongly that she was “way to delicate and graceful and poised for male energy”. Anne said, “Yes, she is so sensitive that you just think it and she does it.”

Ellie finds it easy to do one-tempi canter lead changes on Annie but wanted to know how to convince Annie to do two-tempi changes, i.e., every other stride, in their dressage tests. Annie replied, “Just tell Ellie to get it together, I am not the problem. I can do ten-tempie changes. She just needs to get it together. I have a lot of patience.” Annie laughed, and said, “Please be kind to Ellie this weekend at the Regional Finals. Don’t embarrass the kid”. And Annie replied, “That’s not my problem. She has to do her part. She better get to bed early the night before because I’m READY! Donna laughed hard as she relayed this message because Annie clearly thought she was being very funny.

Annie and Ellie had already been in 15 Grand Prix competitions this year. Donna relayed, “Annie says, ‘The more the better’. She feels like she can go on forever. When what you do is your passion, there is no time involved. Physically and spiritually, she is ready to keep going.” Anne agreed and said, “Annie seems to get younger every year”. In fact, a few days later at the Regional Championships Annie and Ellie were 10th out of 16. One judge wrote on their score sheet that Annie “shows potential”, a comment usually made about a young horse, not one that past the age at which most horses have worn out and retired.

A Message Ellie left for Annie was, “we take you to horse shows because we think you’re lovely and deserve to be there “. Ellie requested that Donna convey this message to Annie because at dressage competitions Annie seemed to act as if she were not there to show off or be displayed.

Therefore, Annie and Ellie both wanted to know if Anne’s behavior was due to low self-esteem or if she had another spin on it. Donna explained that Annie thinks that it is better to be very humble, and that this adds to her grace and who she is. She feels whole from the inside out, so she doesn’t feel a need to say, “Look at me, see how terrific I am.” She said, “I don’t have to flaunt it. Everybody knows it.” Annie knows she is special but does not feel a need to display this. She thinks low key is better. Anne agreed and said that Annie was very special to them.

“Later,” Annie added, “it takes too much energy to be proud. I need my energy to push myself forward! My greatest asset is that I don’t flaunt myself; this speaks loudly. These other horses should realize that just because they finish the test and hear clapping doesn’t mean they’re good! But that’s what they think!

Elli wanted to reassure Annie that she would always stay with the Rawles and never be sold. They would always take care of her and protect her from harm. Donna burst out laughing when she heard Annie’s response, “OK if you want to put it that way. But who is protecting whom? If it makes you feel better, say it that way, that’s OK. Yeah, yeah, yeah, I know I’m staying but you’re staying too. Its a two-way street. I take care of you, and you take care of me.” Donna explained that Annie was confident she would stay with Ellie, because Annie said, “this is where I was headed when I first came onto the planet. I’m going to reach a lot of people with my example.”

This comment about Annie’s destiny being with Ellie was surprising, because Annie was purchased to help Ellie’s older sister, Emily who died unexpectedly 18 months ago during a routine medical procedure. Their father, Bill, had called Annie open, “Emily’s college education”, referring to both her cost and her value as a schoolmaster. Annie revealed that Emily spirit often came to help her. Donna who is also skilled at communicating with spirits sensed that Emily spirit was presently with them.

Anne recalled that when they talked about buying Annie, her owner kept saying Annie would be a wonderful horse for Ellie. And he had to remind her that Annie was being bought for Emily.

Anne explained in three years they had had Annie, they were very pleased with how she has improved. She now has more time outdoors, a new saddle, different shoeing etc. Anne asked what Annie thought of her Nikken magnetic blanket. She said, “It’s Ok. It balances my energy.”

Anne asked what else she could do to improve Annie’s lifestyle, and if she had special requests. Annie’s first request was for a massage, before or after a competition. She would prefer if it were done on a regular schedule. She said, “I’m getting up in years. It wouldn’t hurt if you gave me a rubdown every so often.” And she though her people might also benefit from this. She said, “If you take better care of me, you will also take better care of yourself.”

When asked about her feet and shoes Annie disagreed with her farrier about the schedule of shoeing. She thought he should have come the previous week. Annie thought that younger horses could handle a week or two off their regular schedule, but that at her age the extra toe length tugged on her muscles and legs.

Anne had wanted him to come earlier, but he had convinced her to wait. When he came the next day after the interview, he was told Annie’s complaint and he agreed to change her future scheduling to what she requested.

When asked if she had any messages for the magazine’s readers, Annie said, “Don’t underestimate horses in general. We are very attuned to what we need. More people should inquire about their horse’s opinions about their health and not assume people know it all. If more people would ask like you

Donna Lozito of New York has been involved with animals for more than 25 years. Working in holistic medicine for many years has provided her physical, emotional, and spiritual awareness of herself. Her horse, Sweet Dreams, is her best friend and has recovered from serious health problems with the help of animal communication and good holistic veterinary care. She has been interviewed on TV and radio shows about animal communication. She also does Reiki healing and soul retrieval for people and animals, either in person or from a distance.

Anne Rawle is an FEI “S” dressage judge and competitor. she and her husband, Bill, stand three stallions. And have their own brood mares. Also, several young horses in training at their Watermark Farm in Oxford, PA. Their 24-year-old daughter Ellie is competing with Annie at Grand Prix. And is also competing at that level with two of their home bred horses. She has been on the Region One team. Twice for North American Rider’s Dressage Championships. One year she won consolation classes with lease horses, the other year she competed with homebred mare, Able Spirit. There are two Watermark Form trophies in memory of Emily, one at Dressage at Devon. And the other at USDF Region One Grand Prix Championships.